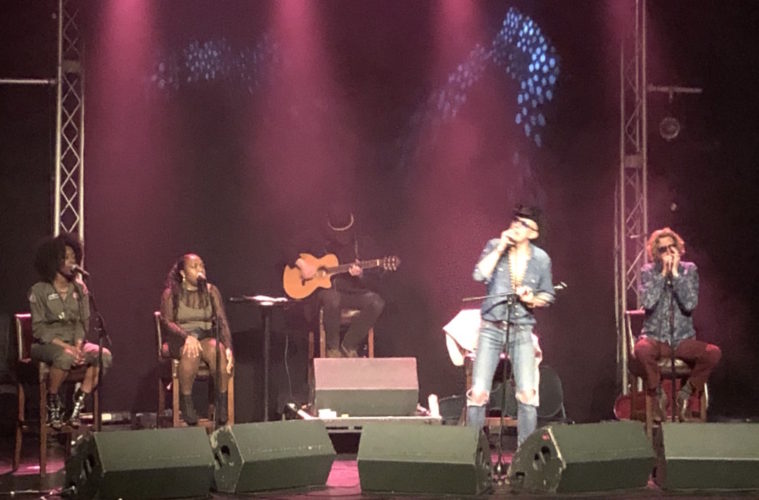 Sometimes, as parents and carers, you just need a night off. That’s how we felt anyway, and when somebody told us that Alabama 3 were playing an acoustic set at Komedia Bath, well to be honest we didn’t know who Alabama 3 were, but thought blow it, let’s go anyway.

We’ve been to Komedia for all sorts of gigs, comedy show and family events over the years, and had never been let down. And the early signs for this gig were good too. OK, the babysitter was late so we missed most of the support slot by the superbly named Ese and the Vooduu People, but what we did see was fantastic. With just Ese Okorodudu on electric guitar and the frankly awesome backing vocals and clear pure love of just being there of Sheena Ross, the quality of their stripped down performance was top notch – great songs, well played and beautifully sung. It was looking good for the main act.

What was particularly good about this evening was that while the atmosphere at Komedia was great, the venue wasn’t packed, meaning that there was a relaxed vibe about the event, plus a complete lack of a queue at either the bar or the toilets. Most of the other punters were about our age too, plus a few even older, so we didn’t feel out of place.

The main act hit the stage before 9pm, another good sign for us parents, confident that we wouldn’t be home too late – how things have changed since the late night gigs and much sought-after lock-ins of our youth…

For this stripped down acoustic set, Alabama 3 were made up on Rockfree Base on slide guitar, Nick Reynolds on harmonica and the Larry Love on vocals, big stetson hat and lots of chatting to the audience, with the support band back on in the role of backing singers.

Almost straight away we were loving it. Combining gospel influences with blues, country and clearly more than a passing visit or two to 90’s clubland, the band were clearly enjoyable themselves in front of an audience who seemed to include a fair number of loyal fans. As Larry Love’s gravelly vocals led the superb musicianship of Reynolds and Mr Base, the backing singings imbued the set with a quality and depth that shouldn’t have worked but somehow did.

It turns out the band has been going for absolutely years and generally feature a far bigger line-up. Even so, they appeared to be enjoying this visit to Bath, the stripped down arrangements working well, with even this old rocker managing a few hand claps to the music and the occasional shuffled dance step.

Between the songs, Larry passed out a stream of thoughts, comments and jokes, which to be honest weren’t always clear enough to be understood where we were standing. No matter, those who could hear seemed to enjoy it.

When the music got a look in, it was fun, infectious and wonderfully played. No, we didn’t know a single song, but that didn’t matter – we joined in enthusiastically when a singalong was suggested and just stood back and enjoyed the rest.

With the occasional check up on texts to make sure all was OK at home, this was a perfect event to remember that there was life outside of the family home. The music was great, the atmosphere friendly and – plastic glasses aside – it was great to add in a pint or two without worrying about getting up for school the next day.

So if the chance comes for a night out without the children listening to a band you don’t know, go on, give it a go. We really enjoyed our night out at Komedia and were making plans on the way home for the next one.