What a treat! Christmas time means the Theatre Royal Bath pantomime and this year’s production of Aladdin has to be one of the best ever. With a wonderful cast, hilarious script and just the right amount of traditional combined with modern touches, Aladdin is, without doubt, a surefire hit for all of the family.

There’s a wonderful, homely atmosphere to the Theatre Royal that makes it such a perfect venue for something as traditional as a good old pantomime, allowing the audience to feel close up and engaged with the fun. This year’s production adds to the event with a great cast including star of Emmerdale and Coronation Street Bill Ward as the evil Abanazar, CBBC’s Mark Rhodes as Aladdin, the ever-popular Jon Monie as Wishee Washee and returning for his second year, the hilarious Nick Wilton as Widow Twanky.

Each of these name stars appears to embrace the fun and frivolity of the show, helping to bring the most of a superb and very funny script. All of the old favourites are – of course they are – from the ‘oh no he didn’ts’ to the singalongs, slapstick, songs and audience participation. And that’s the wonderful thing about pantos – you know what’s going to happen and that’s all part of the fun of it. My three children loved jokes about pants and farts, while the audience could giggle at the more grown-up references to Donald Trump, Nigel Farage and the awful threat of being banished to Melksham! Asked for their favourite scenes, my three all chose the slapstick silliness in the launderette, the hilarity of a bucket of water over the head showing its timeless qualities.

Bill Ward makes a wonderful villain, smiling malevolently at the audience as he milks their boos and welcomes the hisses. Mark Rhodes, meanwhile, is the perfect leading man, handsome and charming, with a great singing voice and cheeky grin. But best of all though has to be the double act of Jon Monie as Wishee Washee and Nick Wilton as Widow Twankey. Jon Monie has developed into a first-rate panto star, exhibiting superb comic timing and knowing exactly how the jokes – old and older – should be told for best effect. Meanwhile panto dame supreme Nick Wilton raps, dances, sings and sashays with superb comic effect, channeling an inner Les Dawson to great effect and with a wardrobe that would make the average mardi gras queen blush.

Saying that, it would be a sin not to laud the wonderful supporting cast. Tom Whalley as a PC Pong is hilarious with a performance that takes over the top to new heights, while Loula Geater as the Slave of the Ring brings a TOWIE style and a great voice front and centre.

We really can’t recommend this production of Aladdin enough – it’s the best panto we’ve seen in years and an absolutely perfect way to welcome in the Christmas season. 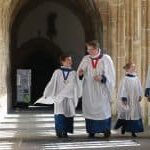 Be a chorister for the day at Wells Cathedral School