Year 7 pupils at Hardenhuish School in Chippenham have recently been given a taste of competitive slam poetry through workshops with Sara-Jane Arbury, a high-profile name on the performance poetry circuit who has been involved with poetry slams nationwide from Cheltenham to Hay-on-Wye.

After a series of mini-competitions in tutor groups in the school’s library, the winners from each session went through to the prestigious Poetry Slam finals evening in Peter Thompson Hall, where they performed in front of a packed audience of friends, family, staff and governors. Now in its eighth year here, the Poetry Slam evening has become an extremely popular part of the school calendar and gives the perfect opportunity for new Year 7s to showcase their talents.

The group entitled ‘Team Names Are Over-Rated’, comprising William Clark and Alex Baird, triumphed in the Alphabet Stories category for their well-constructed tale using exceptional vocabulary of just 26 words, where each word started with the next letter of the alphabet, while the main poetry competition itself proved incredibly close and of a very high standard throughout. In the end, the entertaining raps about soft drinks, heartfelt poems about mums and dads, and quirky tales based on movies were just pipped by the ‘Creative Thinkers’ team who were crowned Slam champions 2017 for two well-written and dramatised poems that left a real impression on the judges and the audience alike.

Their first poem focused on odes to everyday objects, while their winning poem in the Final saw them look at some of their favourite hobbies, ranging from swimming and singing to dogs. The confident nature of their delivery, especially considering they only had half-an-hour on the night to write their second poem, and the clever structure of their rhymes proved a real hit.

Congratulations to Tao-Nina Smith, Ella Smithers and Melody Collins for their win and to all the Year 7s who took part in the workshops and the Slam Finals. The girls follow in the footsteps of notable previous winners including ‘The Wiltshire Farmers’, ‘The Chocolate Bunnies’ and ‘Monkey Madness’ over the past seven years.

Curriculum Leader for English, Dan Skirrow, said, “It was an absolute privilege to see Year 7 wrangling syllables and metaphors in such creative ways when working with Sara-Jane. The confidence and enthusiasm on display from Year 7 during the Poetry Slam was genuinely inspiring, and resulted in a lively and enjoyable evening’s performance. Bravo Year 7!” 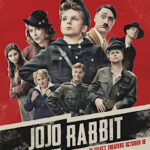