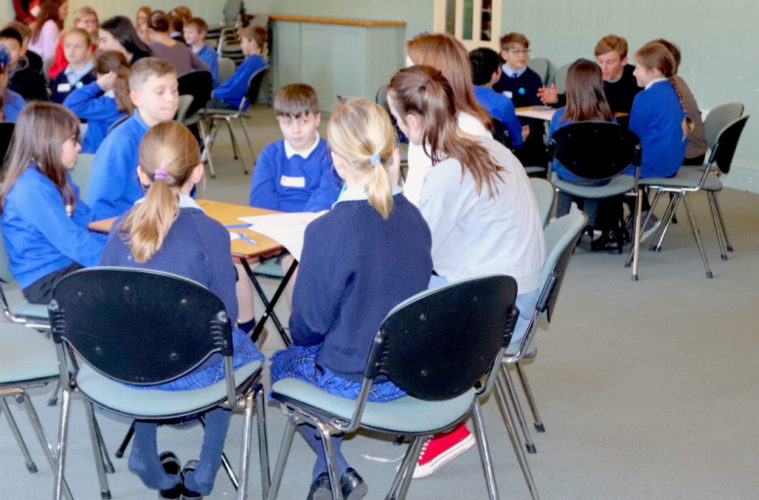 As part of an initiative to help make younger pupils aware of how important the learning of a foreign language is, Downside School recently invited Year 5 pupils from Farleigh School, Andover, and Kilmersdon School, Somerset, to join them for the day.

The event was timed to coincide with World Book Day, with Downside librarian, Ms Craig, choosing ‘Books from around the World’ as the theme for the day. The result was a celebration of international children’s literature with a celebration of language learning.

“The pupils from Kilmersdon and Farleigh joined forces for the day with the Year 7 (First Form) pupils from Downside, with the first challenge of the day being a Euro Quiz,” explained Mr Richard Rawlins, Head of Languages & Head of Careers and UCAS. “The pupils were tested on their knowledge of foreign heads of state, flags, languages, national anthems, celebrities, gastronomy, airlines, landmarks and capital cities. The strong bonds formed within the teams early in the day then enabled the pupils to tackle a task that even senior school pupils find challenging – translating a children’s story into English.” 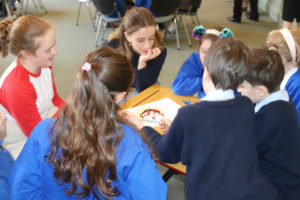 “Downside is part of a European literature initiative, and Mrs Craig and Mr Rawlins selected three stories, one in German, one in Spanish and one in French, for the pupils to translate into English. Although each team worked under the mentorship of one of our Sixth Form language students – and we all were with the superb way in which the mentors engaged with their young charges – they had to work through the texts largely unaided. The translations they managed to produce in just one hour, working from a language with which they were almost entirely unfamiliar, were a great testament to their resourcefulness, perseverance and resilience, as well as to their linguistic ability.”

The teams were also tasked with coming up with a title for their translated story, and this formed part of the artwork, which, inspired by Mrs Williams, the Head of Art, and Mrs Cruden, our Artist-in-Residence, they created in the Art Department after lunch.

After the final rounds of the Euro Quiz in the afternoon, the day concluded with presentations to all the pupils, and Mr Rawlins, Head of Languages, then addressed the visiting parents and teachers on the importance of language learning.

“There were many people to thank for the success of this day, which we hope will become an annual event, but at the top of the list must be the pupils themselves, whose exemplary behaviour and hard work throughout the day impressed us all,” said Mr Rawlins.