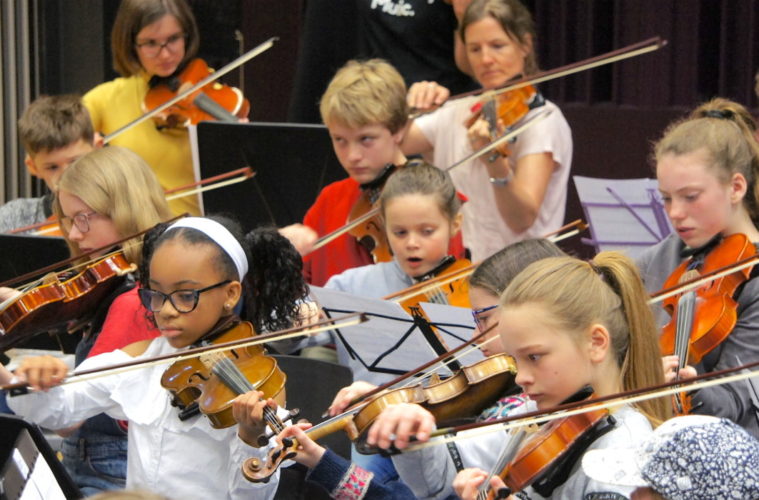 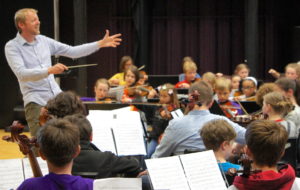 “Today was a unique sort of day that probably no other organisation could have offered because it pulled together a great wealth of young string players, adult amateur string players, local professionals and also today some wind and brass players too,” said Patrick. “The Music Service that is local to here is a superb service and offers lots of things to music students who live locally, but they have finite resources, so a second organisation offering particular opportunities to young musicians is absolutely wonderful.”

Michelle Falcon and Ruth O’Shea of the Bath Strings Academy dreamt up the project a little over a year ago. “We wanted to expand our musical offering beyond the string section and involve the whole community in coming together to make a pop-up symphony orchestra,” explained Ruth. “We know that being inside the sound of a big orchestra is something very special indeed.” The event was hosted and supported by Hayesfield Girls’ School, many of their students taking lead roles. Alice Haig, aged 12, led the orchestra whilst Paige Morgan, also 12, took to the podium to conduct for the first time.

The day also included a world premiere performance of a piece entitled ‘A Time in Space (2019 A Space Odyssey)’. This was a creative response to The Planets, each section of the orchestra having just ten minutes to devise their own theme. The percussionists were tasked with ‘Deep Space’, whilst the brass section ‘Satellite’ came up with ‘B-S-A’ played in Morse code. The whole piece was then choreographed by the conductor.

“Today has been a brilliant day,” remarked Bailey. “It’s been really exciting and fun; such a great energy in the room with so many young musicians who are so enthusiastic and adult amateurs who have been really enjoying getting their instruments out again, maybe for the first time in a long time. We started with some basis musical exercises to play together as an ensemble, to learn to count in 5, which is really tricky. We’ve composed a brand new piece ourselves where we’ve all been able to input as composers and creative musicians as well as orchestral players, and then we’ve learned to play this magnificent piece of British music from 100 years ago, one of the most famous pieces ever written.”

The importance of events like this for developing teamwork and community spirit was highlighted by professional clarinettist Claire King, who runs Bath Spa University’s Community Music Course: “Thank you so much for inviting me to be a part of your brilliant day of music making yesterday! It was so much fun. Everyone was really up for learning loads and contributing their best. It was great to see different levels and ages all working together.”

Next year on 17 May 2020, plans are afoot to put this event centre stage in the community of Bath, with the Bath Strings Academy securing coaching from the BBC Concert & BBC Symphony Orchestras. They will be joined by World DJ Champion and BBC Proms soloist Mr Switch, for a day exploring Gabriel Prokofiev’s unique piece, ‘Concerto for Turntables and Orchestra.’

In the meantime, Bath Strings Academy will host its third annual summer music school from 28-30 August 2019 at Prior Park College. Tutors this year are from the English Chamber Orchestra, Berkeley Ensemble and Coull Quartet. Participants of all ages and levels can join the course on the General Strings or Chamber Music strands.

Further information can be found at www.bathstringsacademy.org