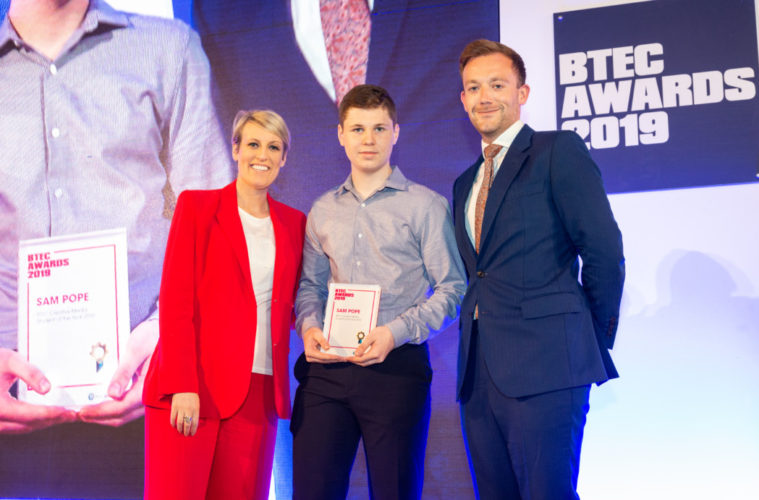 A student at The Bath Studio School has won a national prize for his TV and film work.

Sam Pope was named BTEC creative media student of the year 2019 and received his gold award at a ceremony at Central Hall in Westminster from financial journalist and television presenter Steph McGovern.

Parents and teachers accompanied award winners at the event, which was organised by Pearson BTEC to highlight vocational talent. Members of Parliament and celebrities, including Olympic gymnast Max Whitlock, were also there to hear the students’ success stories and present awards.

BTECs are recognised qualifications which are heavily in demand from employers and universities.

Sam, 17, who is on the autism spectrum, has been at the Bath school, which is part of Wellsway Multi Academy Trust, for three years. He plans to go to university to study film next year.

It is a future that Sam, from Oldland Common, near Bristol, would not have thought possible when he was younger. “I was bottom of every class I was in and had an awful time at school before I came to The Bath Studio School,” he said.

Head of Sixth Form at The Bath Studio School, Max Weedon, said, “I am delighted that Sam has exceeded all previous expectations while studying the TV & Film pathway at a Wellsway Multi Academy Trust school.

“Sam has overcome many difficulties to thrive in his subject areas and his success is a vindication of our unique curriculum design, which puts the student at the heart of an experiential and industry-focused learning process. By treating the learner as the creative talent, for example by giving them the autonomy to direct their own movies, we find that students like Sam have been encouraged to unlock their potential, harnessing their innate enthusiasm and motivation to create valuable intellectual property such as original films.

“We are so proud and happy for Sam that his hard work and talent has been recognised by both the professional film industry and by the awarding body at BTEC.”