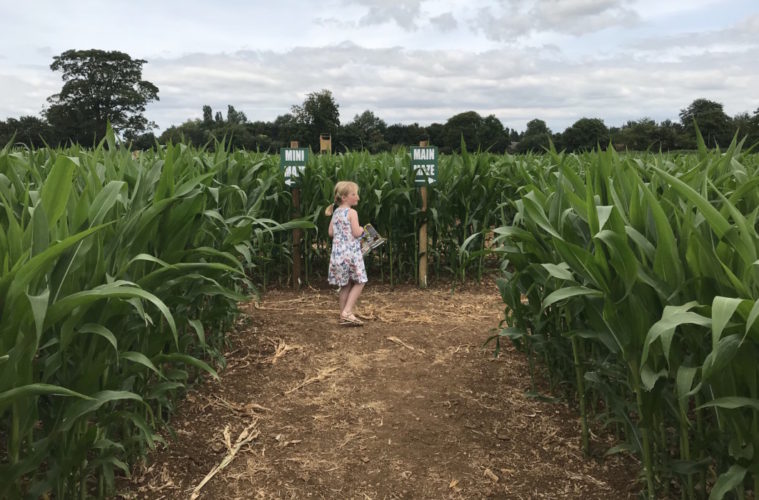 My five-year-old daughter Isla loves mazes, but I have no sense of direction, so we got down to Whitehall Garden Centre’s Maize Maze as soon as it opened. My plan was to get around before the maize grew too high to peer over.

Spanning eight acres and set to grow to seven feet tall by September, the maze is pretty impressive. Visitors can choose to follow the ‘mini maze’ path, the more challenging ‘main maze’ or, like us, attempt both.

I was relieved when we were handed a large red flag to wave if we needed help getting out. Let’s hope we didn’t need to use it. Isla was given a game card with a farm-themed activity for each maze. Once completed, the cards can be handed in and entered into a prize draw.

The mini maze was enough of a challenge for us and is well-suited to any child able to toddle around it. Predictably, I wasn’t much help and after a few, “I feel like I’ve already been that way” comments from Isla, she took over. “Definitely it’s good that you have me,” she said, as she redirected me yet again. The activity spurred her on to complete the trail, and she enjoyed filling in the cows’ spots on the game card.

After completing the mini maze, we relaxed under a shady umbrella with a milkshake and ice cream. The Maize Maze is on a separate site to the garden centre and conveniently has its own large parking area, toilets and a shepherd’s hut café serving hot and cold food. Food options include bacon and sausage rolls, beef and veggie burgers, chips, snacks and ice creams with hot and cold drinks available too.

There is a large grassy area for kids to run around, mini tractors to play on and a tractor tyre assault course for the kids to tackle while you enjoy a coffee.

We decided we were up to the challenge of the Main Maze, and headed back in. “Don’t forget the flag Mum,” said Isla.

After a strong start we did get lost but, with a little help from the watch tower, were able to find most of the animal signs. Each one had a farm-themed question, which I definitely didn’t need to google the answers to. The children we saw tackling the Main Maze were aged around six up to mid-teens, and they were clearly enjoying the challenge.

It’s the first time Whitehall Garden Centre has had a maze attraction for 19 years and it’s a well-organised, fun family outing. We spent a couple of hours there but could have stayed longer. Let’s hope we don’t have to wait another 19 years before having another go.

Open daily from 10am until 5pm, until Sunday 1st September.
Toilets are available with free parking on site.
In the interest of safety and hygiene, only service dogs are allowed.
Maze Entry: £6.99 per person (under ones go free).
Last entry is 4pm.