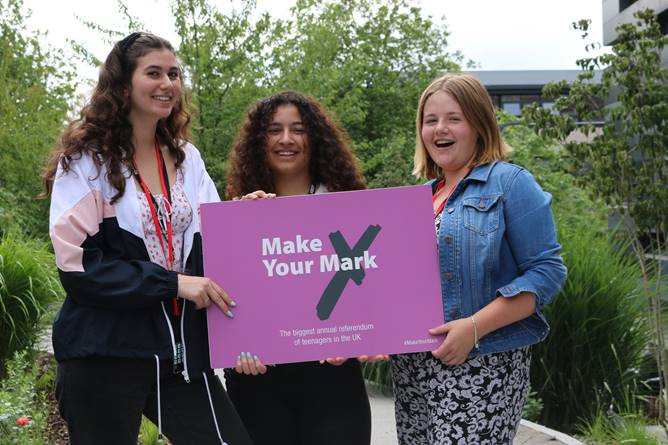 Off The Record (OTR) in Bath is taking part in the ‘Make Your Mark’ initiative that has been launched by the UK Youth Parliament, the largest UK youth consultation of its kind. Following the campaign, the top issues will be brought to the attention of Government Ministers including the newly appointed Minister for Civil Society, Baroness Barran MBE, who has taken on responsibility for youth policy.

The annual ballot, which has taken place since 2011, will give young people aged 11-18 the chance to select one UK-wide issue, one devolved issue and give them the opportunity to identify an issue in their local communities. The ballot includes issues such as knife crime, the environment, mental health in schools and hate crime.

“OTR believes in the power of youth democracy and providing young people with the opportunities to have their voices heard,” said Phil Walters, the Director of OTR. “OTR is proud to run the BANES Youth Forum, and this week, in conjunction with the British Youth Council and Youth Parliament we have launched ‘Make Your Mark.’

“Make Your Mark is the UK’S largest Youth consultation – last year alone OTR collected the views of 5683 young people in BANES! This was a record number for BaNES and The Youth Forum, and we aim to beat that figure this year. If you are aged 11-18, look out for an opportunity to get your views heard via your vote! We will be in schools, colleges, youth groups and Southgate. If you’d like to find out more please contact Charlie email hidden; JavaScript is required.”

This year’s nationwide campaign is funded by Fledglink and supported by the British Youth Council and UK Parliament. The campaign, which is expected to reach hundreds of thousands of young people, will see Members of Youth Parliament and volunteers across the country, invite young people in schools and youth groups to take this opportunity to have their say, to influence the Government and decision makers in their communities. In 2018, more than 1.1 million young people from every corner of the country took part.

Khadeejah Hullemuth, a member of the Procedures Group, which coordinates the UK Youth Parliament, said, “Hundreds of thousands of young people across the country will get a chance to declare which issues are their biggest priority.

“Make Your Mark gives decision makers at every level of Government the opportunity to understand young people’s priorities. Young people are passionate about the world they live in and their futures and politicians should not only listen to our concerns but act on them.”

The top issues will be debated in the House of Commons chamber on Friday 8 November. The debate, which has taken place every year since 2009, will be chaired by Rt Hon John Bercow MP, Speaker of the House of Commons, who spoke at the UK Youth Parliament’s Annual Conference in Leeds earlier this month. After the debates, Members of Youth Parliament will walk through the division lobbies to vote on what should become their priority campaigns for 2019. In previous years, mental health, tackling racism and religious discrimination and knife crime have been prioritised.

Find out more information about the consultation by visiting www.ukyouthparliament.org.uk/makeyourmark