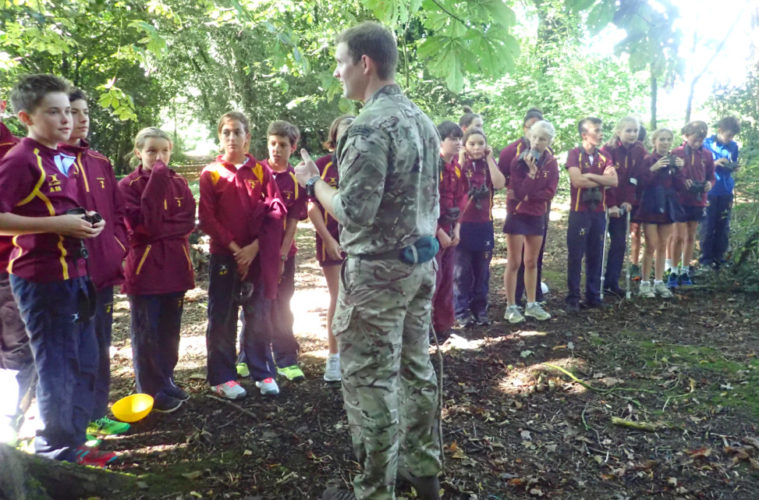 Year 8 pupils at All Hallows school recently enjoyed a leadership and team-building workshop delivered by Corporal Tom Hunt and Marine Ben Smith from the Royal Marines.

The day began with a presentation on life in the Royal Marines and what it takes to be a Royal Marines Commando, followed by an extensive Q&A with Cpl Hunt, during which the children asked some probing, challenging, and insightful questions.

Next the children enjoyed a variety of intensive physical training challenges, including a ‘field gun’ relay, before they were off into the woods for observation tasks and a stretcher race. The children were challenged to make their own stretcher from a length of rope and use it to transport a casualty through the woods as quickly as possible.

In addition, the pupils were taught some observation principles to employ during a short ‘find Marine Badmin’s kit’ game to give them a taste, in a fun way, of basic field craft that a Royal Marines Commando adopts in the battlefield environment. 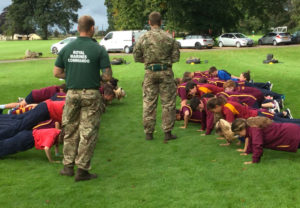 Cpl Hunt made a point of saying to the children that they were outstanding in their effort, attitude, and humility, and saw some clear leadership characteristics in many of the children.

“The aim of the session was to push the students outside of their comfort zone in order for them to realise they are capable of so much more, particularly when they are tired and fatigued,” explained Cpl Hunt. “We were extremely impressed with the effort and enthusiasm displayed by the Year 8 pupils and hopefully those who are thinking of a career in the armed forces will consider a career in the Royal Marines.”

All Hallows games staff were extremely grateful to the Royal Marines team for giving up their day to spend with our Year 8 pupils, allowing them to have this unique and inspirational opportunity.