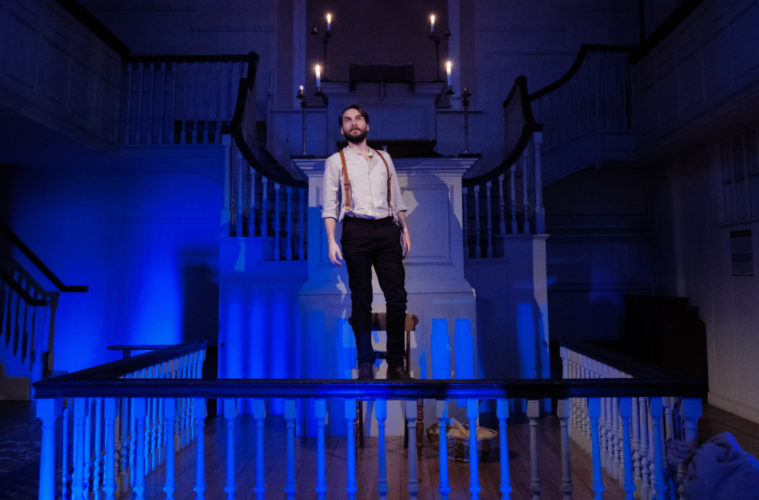 My daughter and I both love stories – reading, writing and performing them. When we heard that Bristol-born theatre company Insane Root had adapted the Brothers Grimm’s Rumpelstiltskin for the stage, we jumped at the chance to see it. The company has a reputation for producing innovative, immersive theatre in Bristol’s most unusual spaces, including Macbeth in the caves of Redcliffe, a chilly Tempest nestled in the Crypt of St John on the Wall and Romeo and Juliet in a disused swimming pool. With this production, director Hannah Drake moves away from Shakespeare, promising a ‘reimagined, spine-tingling take on this ancient folk tale of greed, imagination and the terrible choices we have to make’. She has created an original and enjoyable version of the story, in a venue never before used for theatre, excellently performed and with some interesting twists.

Rumpelstiltskin is a dark tale centred around a poor miller’s daughter who outwits the King by making a dangerous bargain with a strange, nameless man. In return for his help, she promises him her unborn child, but when the time comes to fulfil this contract, the girl will stop at nothing to keep her baby. This production uses a beautifully adapted, lyrical new script by award-winning Bristol writer Matt Grinter, which stays loyal to the original tale. 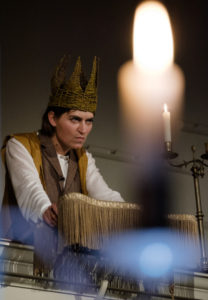 Contrary to its name, the New Room is the oldest Methodist building in the world, hidden in Bristol’s Broadmead shopping centre. It has recently become part of the ‘Poldark Pilgrimage’ as a number of scenes were filmed here! The audience (mostly adults with a few older children and teenagers), waited somewhat nervously in the beautiful atrium. Three actors appeared from different directions and weaved their way through the expectant, standing spectators, talking to us directly about the power of words, stories and using your imagination. This helped to set the tone of the performance and create a sense of excitement. They led us into the New Room, where we were seated on benches surrounding a central scaffold-like stage. Dwindling, natural, evening light glowed through the large, rear window. Candlelight and an earie vocal score helped create an atmosphere of bedtime storytelling with sinister undertones.

The 70-minute show moves along at a galloping pace, making use of the entire room including the balcony. We felt completely immersed in the story from the start, in the semi-darkness with music and voices coming from all angles. The actors were exceptional, with bags of energy and commitment to their multiple roles. We were completely taken in by the unusual puppetry, using an animal skull and sheer black fabric to represent the repellent creature, Rumpelstiltskin.

We felt desperately sorry for the Miller, a loving, proud but ultimately powerless Father, unable to help his only child. We instantly empathised with his daughter Millie (Katie Tranter), who struck just the right balance between feisty teenager and helpless handmaid, whilst my daughter enjoys theatrical tricks and loved the spinning wheel, turning straw into golden reels of fairy-lights.

The production is aimed at adults and children over ten years. My daughter is a little younger but has a keen interest in books and the theatre. Although the production has some unexpected frights which made us jump, it is not overly scary.

The king was larger than life, in the tradition of a pantomime tyrant, but there were subtler, darker undertones to his incarceration and forced marriage of Millie – thought provoking and relevant stuff for the grown-ups in the audience. There is humour sprinkled throughout the script, and some witty ad-libs from the actors. I would suggest children over seven would enjoy the production as my daughter was captivated throughout, finding it at times funny and at other times sad, such as the moment when Milly is locked in the tower. She preferred the ending to one she was familiar with from school. Without giving the conclusion away, she thought it was ‘cleverer and more realistic’. Teenagers would be intrigued by the sheer unusualness of the venue and the staging.

We left with a sense of having experienced something very special and unique, both old and new. The production was gripping and I would recommend it if you have children who enjoy the theatre and you want to try a different type of theatrical experience.

Rumpelstiltskin in The New Room runs until 1 November. For more information and tickets go to www.insaneroot.co.uk