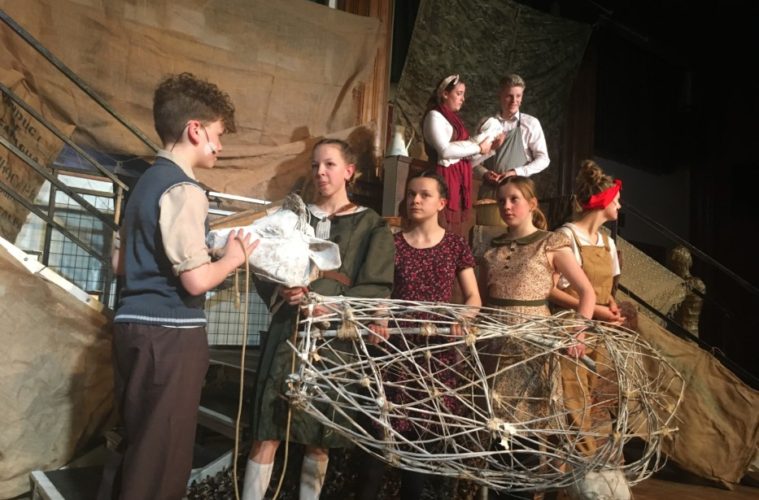 Review – Into The Woods at Saint Gregory’s School, Bath

The early signs were really very good – the sold out seats, the incredible set, a full orchestra that even sounded good during its warm-up… Opening nights are often a nervous affair, and the anticipation was evident for Saint Gregory’s School’s production of Into The Woods, starring an impressive cast of the school’s performing arts student from Year 7 through to 13. As it turns out, the result was extremely impressive.

Into The Woods brings together the stories of a number of classic fairytale characters, including Cinderalla, Jack (of the beanstalk fame), Little Red Riding Hood, Rapunzel and more, in a tale of bravery, family loyalties, adventure and just some good old fun.

And what an amazing job this creative and impressive production delivers! Throughout the acting is really very impressive, the stage and design clever and innovative, the musical accompaniment from the excellent orchestra of a very high standard and the lighting and sound from the tech team hitting the marks perfectly.

The story starts with a group of narrators introducing the characters and even becoming part of the plot themselves. We’re soon introduced to the baker, played by Harry Smith, who, along with his wife, Phoebe King, yearns for a child to complete their family home. Both leads play their parts with wonderful confidence and touches of excellent comic timing.

However, an evil witch – well, it is a fairytale land – played with superb menace and impressive energy by Ellie Hall, has cursed the family to be childless, unless the unfortunate couple can bring to her four objects, all to be found with other fairytale characters in the mysterious and scary woods.

So starts the quest, taking in any number of well-known fables and characters along the way, including a terrifying giant, a snow white cow and even a hen that lays golden eggs.

Throughout the individual performances are excellent, with special mention going to Finlay Gilmour as Jack, Nancy Adams at Little Red Riding Hood and the hilarious Atticus Lorenzo and James Pearce as the two princes, clearly channeling their inner Williams and Harrys to excellent affect.

The amount of rehearsal and dedication that has gone into this production is so clear to see, with reams of script almost faultlessly delivered and a confidence among the cast that must have hidden those inevitable first-night nerves. OK, yes, perhaps some of the speech was somewhat hurriedly delivered at times meaning that the enunciation wasn’t always as clear as it could have been, but this was a minor flaw.

Saint Gregory’s School has always enjoyed an enviable reputation for its theatrical productions and Into The Woods will only add the honour. What a wonderful production and a great celebration of the talents of the children and staff who have clearly worked so hard to bring it together.

Tickets for the Thursday and Friday night performances are available here

Camp Teepee at The Paragon