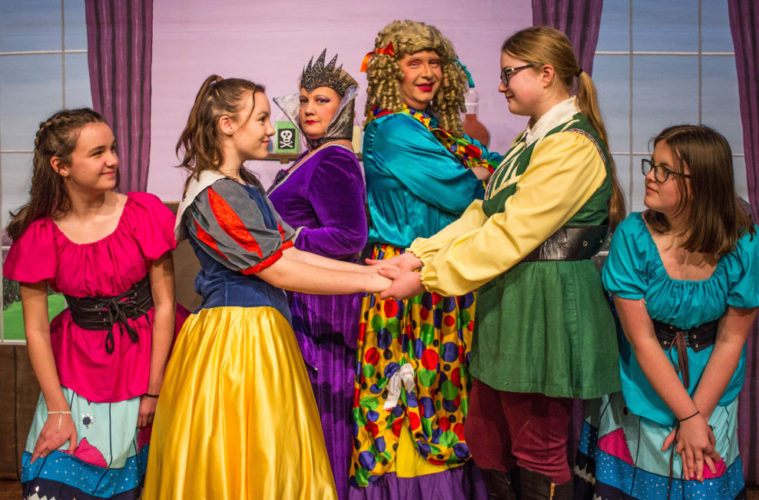 From the start it is difficult to believe that the two lead roles of Snow White and Sonny are played by novice teenagers. Their performances, along with that of all of the cast, were confident, faultless and well-polished, showing no signs of nerves or inexperience. Special mention must also be made to the wonderful duet the pair perform from The Greatest Showman, and in contrast the hilariously tuneless wooing song and ukulele rendition from Tom Jenkins aka ‘Prince’ Albert Nomomey.

Yvonne Conroy is superbly cast as the evil Queen Witch-Hazel, who performs with calm confidence, humour and wonderful wickedness. There is, of course, a hilarious dame with flamboyant costume, played by Jeremy Hunt, whilst the seven dwarves are politically corrected to the Diddy Ones, a group of younger members of their cast on their knees.

The creative story references local rivalry and makes several local jokes, thereby adding to the appeal of the humour. Scenes are adjusted with ease using beautifully crafted drapes and fun special effects for the mirror; Pete Rogers wonderful facial expression makes the best of this role. The small wardrobe team must also be congratulated on its fantastic efforts.

After a short interval with available refreshments supporting Teenage Cancer Trust and Odd Down Youth Club, the storyline reverts to the slightly more traditional. No pantomime would be complete without the “Oh yes it is/Oh no it isn’t” and “It’s behind you” lines, as well as a little baking fun. The humour and jokes are appealing throughout and are not overloaded, which can sometimes be the case with panto. There is entertaining farce after a mix-up with the love potions with great use of Benny Hill music. In addition, the songs and dance performances from the chorus line are impeccably performed and appropriate.

The story wraps up with all of the loose ends happily tied together, wedding bells and even a sneaky jovial reference to the Megxit! To sum up and using their own catch phrase, it was such fun! This is amateur dramatics at its best from a hugely talented community group.

Snow White runs at St Philip & St James Church, Frome Road, Bath until Saturday 25 January with performances at 7:30pm and at 2:30pm on Saturday. Tickets are £8 adults, £6 concessions, £5 children available online at www.ticketsource.co.uk/spsjdrama or from the Box Office on 01225 835228.