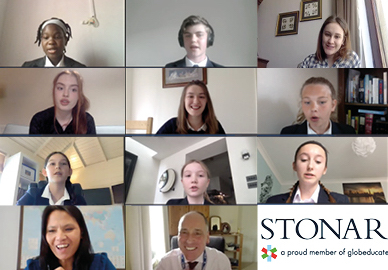 Instead of their planned trip to Nice, the students competed in a very successful virtual debate. Stonar is part of a progressive international group of schools, which enables pupils located at their impressive rural campus in the village of Atworth, near Bath, to take part if a wide range of international events with their peers in other schools within the group.

Students from Years 8 to 12 debated such issues as ‘Does travel and tourism exploit poorer nations and benefit richer ones? and ‘The production and use of cars across the world should be banned’. In their roles as Speakers, Chair and Jury members, Stonar students delivered their arguments with precision, confidence and a natural ease. The opposing schools from Spain, Portugal and France also did an impressive job with talented students presenting in their second and third languages. It was a great event, where new friendships were formed that will further support virtual debating competitions within the group.

Globedcate’s Education Director, Oanh Crouch, commented of the Stonar students, “I have just had the pleasure of completing five hours of debating with your students! I wanted to write to congratulate you and your students on the dedication they brought to the process, but also comment on the high calibre of skill on display.

“Eight of our Globeducate schools were involved in this inaugural event – and what an event it was. The passion your students have for relevant and current issues, and the manner in which the content was presented and delivered was incredibly impressive. It was wonderful to see the students flourish on a global platform.”

Developing students’ debating skills is a core part of the curriculum at Stonar and students benefit from competing in a number of local and international competitions.