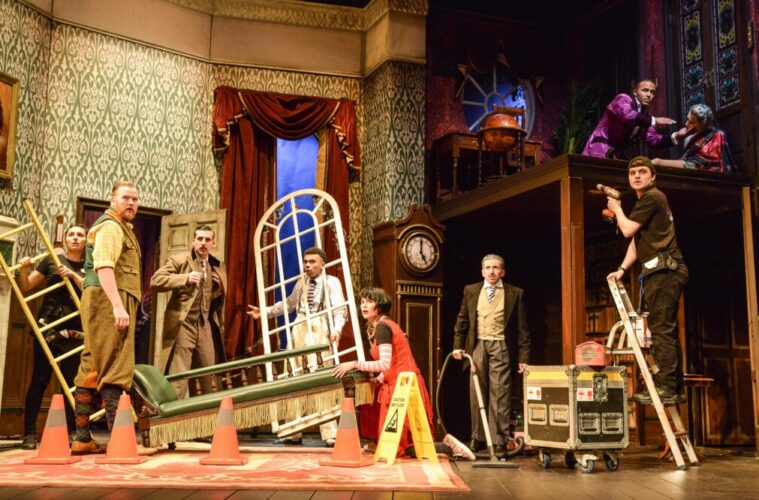 What a real treat to be back at the Theatre Royal Bath, enjoying a production that came with great reviews and promised a well-deserved distraction from everything in the real world.

Yes, there are a few special arrangements in place to make sure that this wonderful venue followed the new restrictions that have been put in place to combat Covid. As with all the audience, we were given specific times to arrive, told which doors were linked to which seating areas, asked to wear masks throughout the performance and, once the show ended, had to wait to be told when each row would be able to leave.

To be honest, none of these were a pain – we’ve all pretty much got to used to similar requirements these days – with the only real oddity being the number of empty seats in the theatre, another requirement to ensure social distancing.

As for the play itself, this was something of a quandry as it seemed to split the audience into two groups, the greater number who absolutely loved it and the few – me included – who really weren’t that bothered at all!

The Play That Goes Wrong follows the attempts by the Cornley Polytechnic Drama Society to put on Murder At Havesham Manor, an old-school, Mousetrap-esque whodunnit set in a stately house, complete with the usual suspects. The problem is, everything that could goes wrong, well, does…

Right from the start the scenery malfunctions and falls apart, and within no time corpses are coming to life, actors forgetting their lines and stars being knocked out and hastily replaced by reluctant stand-ins. And for the majority of the audience, the results are hilarious. It’s just, sorry, it didn’t work for me.

From the off, the comedy really just wasn’t that funny, made worse by the terrible comedy timing within many of the set pieces and the predictable nature of the action. And yet generally around me, the laughter was raucous, with one couple just a couple of rows in front not being alone when absolutely howling with joy at each and every misadventure enacted by the energetic cast. Clearly I was just missing something here…

So was it all a disappointment? Fortunately not – there was a few passages that worked well enough – and very occasionally very well indeed – to keep me away from wishing for a swift end to the entertainment. A scene where one of the characters talks directly to the audience, imploring them to take the production more seriously, was wonderfully handled. Similarly, some of the word play, notably with two characters getting their lines completely out of line, was very clever, while another character’s mispronouncing his words, was old-school funny.

Special mention should also go to Tom Bulpett as Thomas Colleymore, showing great comedic athleticism as he balanced various props on a sloping surface as the scenery disintegrated around him.

Sadly, for me these were the exceptions in an otherwise disappointing production. This is particularly unfortunate as all credit must go to the cast who very much at the last minute were rushed down to Bath to make sure that the play went on after the original cast were placed into a Covid-enforced isolation.

So how to sum up? Well, here is a hugely popular play that was clearly loved by most of the audience, and yet that on a personal level, I really didn’t enjoy at all. Was it good to be back at the theatre? Absolutely. Will I be back again? Certainly? It’s just, on this occasion, I will have to beg to differ with the majority but be extremely happy that they clearly loved their evening out.

The Play That Goes Wrong runs that the Theatre Royal Bath until 16 January 2021. To book tickets, click here