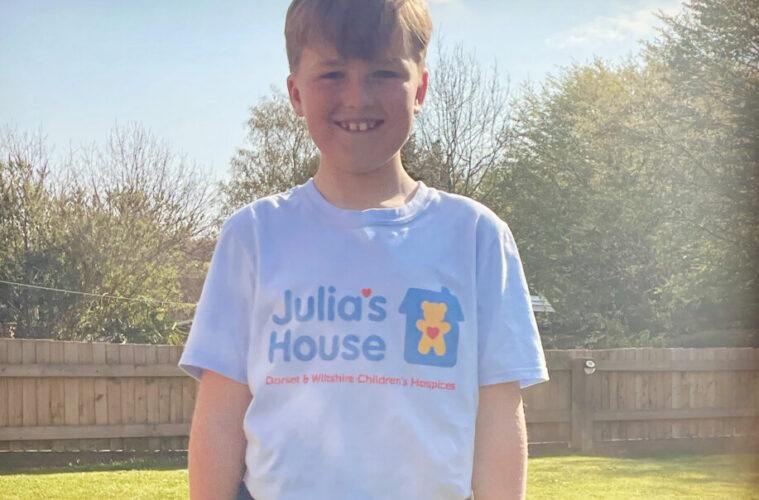 An eight-year-old boy from Wiltshire is on track to complete a marathon challenge around his local cricket club for Julia’s House children’s hospice.

Luka Bayes from Dauntsey Academy Primary School in West Lavington, who plays for the Under 9’s at Potterne Cricket Club, has been running at least one mile every day since his eighth birthday earlier this month.

As well as running on his dad’s treadmill and near his home in Potterne, Luka has been doing laps around the village’s cricket club grounds, completing his final marathon mile on Saturday 1 May before the club’s first team game against Bridgewater Cricket Club.

Dad Jamie Bayes explained, “I’ve been volunteering at the club for a while now and we’re regularly fundraising and supporting Julia’s House up there, so Luka knows about the charity and actually visited the Devizes hospice soon after it opened.

“He understands that the children that Julia’s House look after have life-limiting and life-threatening conditions, and he wanted to raise money to help them have whatever they needed. I think because of Julia’s House being a local charity that cares for local families, it felt like something he could relate to as well.”

Luka had hoped to raise £100 for Julia’s House, but already the youngster has raised more than £600 for the charity, which cares for some of Wiltshire’s most seriously ill children and their families.

Nicky Clack, Fundraising Administrator for Julia’s House, said “We’d like to say a huge thank you to Luka for taking on his marathon challenge. It’s really heart-warming that he wants to make a difference for the children we care for in his local area.

“We’re also really grateful to everyone at Potterne Cricket Club for supporting Julia’s House for so many years. We don’t receive any ongoing government funding in Wiltshire, so our fundraisers and supporters really do keep our care going – in our Devizes hospice, in the community and in local family homes.”

Support Luka in his challenge and make a donation to Julia’s House at https://www.gofundme.com/lukas-marathon-fundraiser

And if you’re inspired by Luka, find out more about fundraising for Julia’s House at www.juliashouse.org