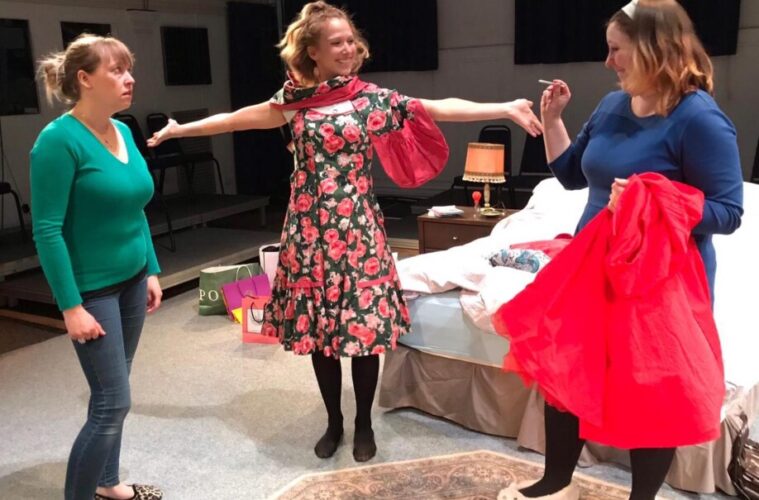 Review – The Memory Of Water at the Mission Theatre, Bath

It was great to be back. After months of lockdown and a total lack of real, actually happening right in front of you theatre, it was genuinely exciting to be in the audience again for a live performance.

The venue was The Mission Theatre, a wonderful independent performing arts centre in the middle of Bath, for the opening night of Shelagh Stephenson’s The Memory Of Water. Before the production had even got underway, however, the Mission’s own Artistic Director, Ann Ellison, took the time to welcome everyone back to live theatre and explained that this must be the venue’s longest ever preparation for a show, with rehearsals starting way back in 2019!

What’s more, all of the cast had remained in place, with the exception of the actor playing the part of Catherine. “The first became pregnant, the second had an accident and the third had to take the role on with just a week’s notice,” explained Ann. Add to this the urgent fundraising that the Mission is currently carrying out to raise a whopping £110,000 to cover crucial repair’s to the venue’s roof, and you can appreciate the company’s relief that at last the audience was in and there was a play to perform.

The production itself is a wonderful portrayal of the events surrounding three sisters who are drawn together to deal with the death and imminent funeral of their mum. What follows is a look at relationships, the nature of memories and the true effects of secrets discovered. As each of the sister’s struggle to come to terms both with their loss and their past relationship with their mum, so they inevitably begin to understand a little more about themselves.

Throughout the performances are excellent, none more so than Jane Lawson as the mum, Vi, who appears throughout to challenge each daughter’s memories and to provide some form of understanding both for her and them. Jane is utterly convincing and thoroughly watchable as the thick-skinned, strong-willed matriarch who struggles to match the daughters’ views of their childhood with her own.

Absolute credit also must go to Georgi Bassil at Catherine (the third!), all sassy and self-obsessed on the surface, but actually covering her insecurities with a taste for shopping, booze and drugs.

Throughout, however, this is a wonderful ensemble piece, with Hayley Fitton-Cook as Mary and Liz Wilson as Teresa superbly completing the sisterly trio, at one moment arguing and accustional, the next mucking around as they dress up in their mum’s old clothes and share the whisky and joints that are handed around. Meanwhile, you can’t help but feel sorry for Robert Edwards as Theresa’s husband Frank and Richard Matthews as Mike, Mary’s married boyfriend, who struggle to fit in around the sister’s long hidden secrets and desires.

While covering subjects of loss and conflict, betrayal and missed opportunities, this is still of work with plenty of light moments tied into an often witty script, which helps to entice the audience into the private lives on display. Throughout, however, it’s the performance that dictates its success and it absolutely deserved to see the cast receive a standing ovation at the final curtain.

So if you get the chance, here’s a wonderful opportunity to enjoy real live theatre again in Bath, and in the process you also be helping to secure the future of a wonderful example of the local arts scene.

For more information, go to www.missiontheatre.co.uk