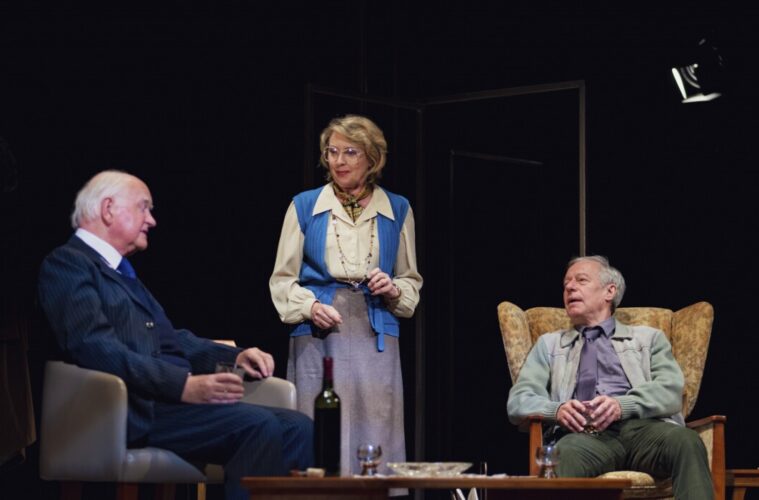 Review – A Splinter of Ice at the Theatre Royal Bath

Moscow 1987, a time for an ageing spy to finally reconnect with an old friend who just happens to be one of the world’s most well known novelists. That spy was the infamous Kim Philby, a former British intelligence officer, double agent and part of the Cambridge Five spy ring who years had passed on secrets to the Russians. The novelist was Graham Greene, author of the Third Man, a former colleague of Philby’s and the only person to have defended him after his defection to the East.

In A Splinter of Ice, Philby’s Moscow apartment becomes the setting for the meeting between these two in Ben Brown’s political drama which sees the ageing protagonists sharing old stories and explaining their roles in a shocking incident that shook British intelligence to the core.

The result is a fascinating piece of storytelling that unveils how Philby’s political indoctrination took him from a privileged Oxford scholar towards a keen and unswerving dedication towards the political beliefs of the country that would become his home.

Throughout the acting is superb, with Oliver Ford Davies, in the role of Graham Greene, perfect as the typically old school scholar and writer, charming and perspective throughout, while also constantly in search of understanding about the reasons for his old friend’s defection.

Stephen Boxer, as Kim Philby, meanwhile, brings a convincing passion to the role, showing both the traitor’s strength of belief about the crimes that he has committed – crimes that led many to their deaths – alongside a human need for warmth, acceptance and simple loving friendship.

The two main characters are joined by Karen Ascoe as Philby’s fourth wife Rufa, his sole remaining loving contact as his friends in Russia have either died or deserted him.

This is old-school theatre, beautifully performed and directed, with a focus on character and period as much as plot and setting. It’s by no means a fast paced production – instead more considered and even pondering, much like its two main characters. Here, however, is a chance to understand at least something about one of those people behind the newspaper headlines and numerous books, not in a forgiving scenario, more putting his side of the situation and showing him as a man of real belief, even if those beliefs didn’t fit in with the values of most of his countrymen.

The result was fascinating and intriguing, with secrets and ulterior motives unveiled, along with a sadness for lost friendships and broken relationships.