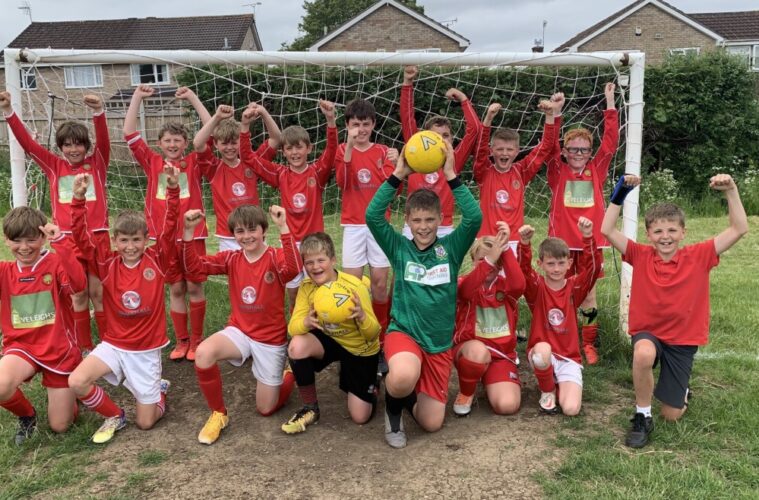 Sporting successes for the pupils from Saltford Primary School

The Year 6 Boys’ team (pictured top) started the success with a winning performance in a friendly against Oldfield Park Junior School. Within minutes of the kick off, Saltford peppered the goal line. It was Alfie’s  strike with a whopper into the back of OPJS’s net  which sealed the first well deserved goal. Then in the dying seconds of the final quarter, Alex weaved himself and the ball through the oppositions defence to seal the win for Saltford with wonderful strike. Ecstatic celebrations followed from everyone including Mrs Brook and Mr Bowkett!

Turning to cricket and 17 Year 6 girls represented the school at the annual B&NES Kwik Cricket competition held at Glasshouse Playing Fields on Monday 14 June. One of the teams lost two of their matches in the morning but after lunch began a winning streak to win their final two of the day!  The other team remained unbeaten throughout the whole day, playing some incredible cricket, fielding some magnificent balls and deservingly winning  a place in the final against St. Stephens. While St Stephens were triumphant, many congratulations to all of the girls who took part and to all of the parents who helped with transport and supported the teams throughout the day.

Taking part in their own Tour De Saltford, The Peloton gathered early one Tuesday for the ‘One Day Classic’ cycling event on the school field, otherwise known as the ‘Salterium’. Riders from Class JG & Class NS participated in a series of highly competitive races, as well as receiving some expert coaching tips from Mark Smith from British Cycling. By the end of the day, the children were exhausted having enjoyed a wonderful, energetic event and it was clear to spot a future Geraint Thomas, Chris Froome, Lizzie Armitstead and Laura Kelly amongst the talented bunch.