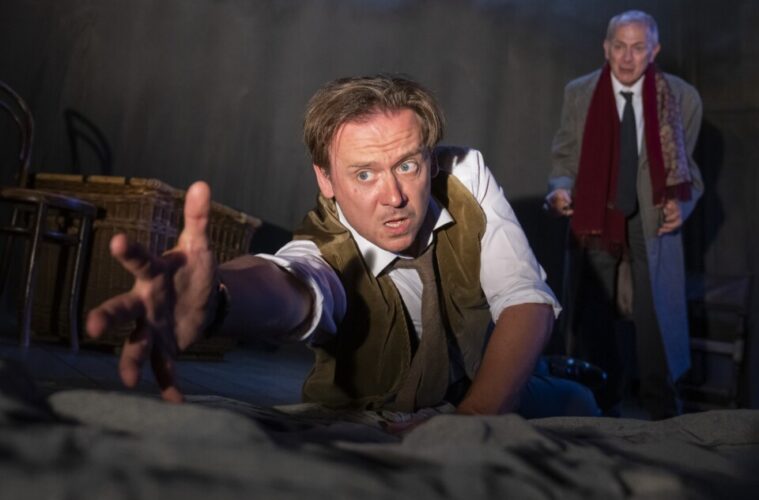 Review – The Woman in Black at the Theatre Royal Bath

A regular return for some of the scariest theatre productions around

She’s back! The Woman in Black has been sighted at the Theatre Royal in Bath and deeds of terror are sure to follow…

Now celebrating more than three decades in the West End, The Woman in Black is also a regular visitor to Bath, perfect evidence of the popularity of this superb study of horror, combining a clever plot, bags of atmosphere, wonderful performances and an almost certain guarantee to make you jump and even scream!

This was my third visit to watch the production, the first though with my 15 year old daughter who I had warned in advance that this was a bit scary and asking would she be OK. “No problem dad,” she assured me, “I’ve seen the film and it wasn’t that scary.”

If you are new to the story, this excellent stage adaptation by Stephen Mallatratt’s of Susan Hill’s best-selling ghost story starts very low key and with even plenty of comedy to the fore. Arthur Kipps, played by Robert Goodale, has paid for the services of The Actor, played by Antony Eden, to help him present his recollections of his terrifying encounter as a young solicitor with a ghostly woman in black, an experienced that has haunted him ever since and indeed brought tragedy on his family.

His hope is that by presenting the story, he can diminish the effect it has over him. What follows is just a wonderful piece of old school horror including creepy houses, strange noises at night and ghostly apparitions.

I loved it! Yes, I’d seen it before but the still jumped at one particular fright and so enjoyed watching the plot develop. Robert Goodale as Kipps was just wonderful, jumping in and out of different characters as the plot demanded, at one moment dour and nervous, the next excited and extravagant. Similarly, the energy and range from Anthony Eden as The Actor was incredibly impressive and a great pleasure to watch.

To detail any more of the plot would be unfair on unsuspecting new audiences – enough to say that my daughter managed a whole visit to the theatre without a need to text anyone or check her Instagram account – intermission aside, of course – and appeared genuinely engrossed by the play. Was she scared? Apparently not, although she did say that she really enjoyed it and even talked me into watching the film version with her.

While the Woman in Black is certainly not suitable for very young children, it is cracking piece of theatre and great proof that you don’t need movie special effects to make an audience’s spine tingle just a little…