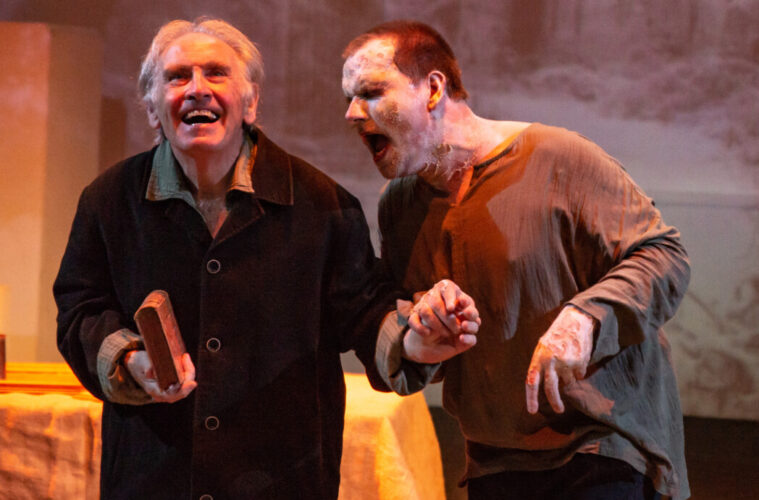 Frankenstein is certainly back and making his mark on Bath. Following the recent opening of the excellent House of Frankenstein museum in Bath celebrating the life of author Mary Shelley and the creation of her most famous creation, comes an excellent and superbly realised production of Frankenstein the play at The Mission Theatre.

Written by Nick Dear, this thoughtful and creative adaptation puts the monster firmly at the centre of proceedings, starting with his rebirth and following his search for understanding, acceptance and ultimately love in an unforgiving society.

From the very outset, Richard Matthews portrayal of the monster is magnetically awkward, incredibly skillful and full of pain, hope, anger and naive wonder. It’s a superb realisation of a terribly lost soul, damned and betrayed, cast out by his creator and yet desperate to be accepted.

Frankenstein is, of course, so much more than a monster story. Written at a time when science was experiencing early breakthroughs in its understanding of areas such as the power of electricity and human anatomy, it is also written by an author dominated by both the romantic notions of poetry, but also the teaching of her father, the philosopher William Goldwin, and the reputation of her mother, the famed feminist inovator Mary Wollstonecraft, who died giving birth to Mary.

As such, Frankenstein explores the terrible possibilities of the misuse of the potential powers of the new sciences, with man acting as God and yet failing in his responsibilities to care for the creature he creates.

Here is a production that shows there’s so much more to this creature than its looks. This is a creation that learns to speak and read in an effort to desperately become more human. He quotes Milton and uses his almost extreme strength to initially help others, but this is no Marvel superhero, rather a tragic, disowned, fatherless lost creature who is cast out and mistreated by society.

The strength in this production comes from Matthews’ ability to show all sides of the monster’s life, from his love of bird song and music, to the terrible revenge he inflicts on those who he sees as doing him wrong. One remarkable passage where he enters the bedchamber of his creator’s new wife, Elizabeth, played with a real strength and yearning by Lydia Cook, to speak to her about what has brought him to her home is full of tension and dark promise.

Absolute credit must also go to Chris Constantine as Victor Frankenstein, all entitlement and self wonder, and yet ultimately careless as to the effects of his grand schemes on those around him. His exchanges with the creature, at one moment full of hatred and anger, the next so impressed with his own powers of creation, are very well delivered.

There is a lot to admire about this brave and very impressive production, with the entire cast worthy of applause for bringing this challenging tale to life against a basic set and minimal props. In addition, huge credit – as ever – should go to The Mission Theatre, a wonderful Bath venue that continues to champion grassroots theatre with an admirable range of productions.

Frankenstein runs at The Mission Theatre until 11 September. For more information and to book tickets, go to www.missiontheatre.co.uk