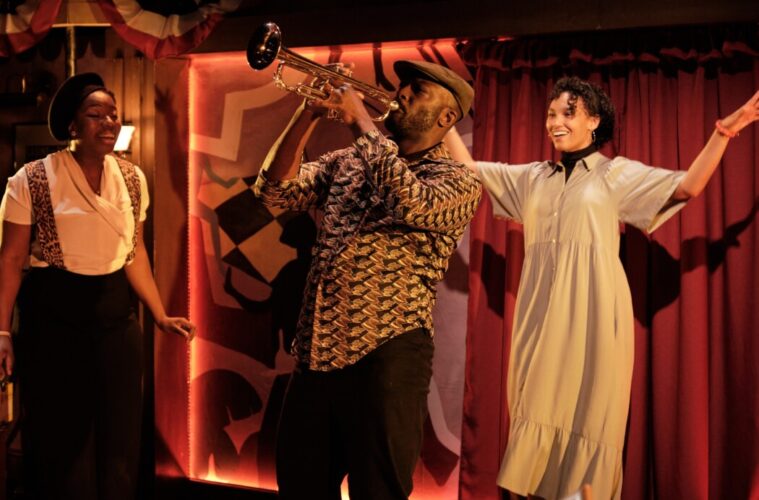 The Egg Theatre in Bath is a cosy intimate setting, offering a truly unique and exceptional experience, where children can enjoy an up close and personal performance which will hopefully give them a true love for the arts.  My goddaughter’s first reaction was awe as she walked into the theatre and was immediately captivated by its charm.

Josephine tells the story of entertainer, spy and civil rights activist, Josephine Baker. Using original music, dancing from the Harlem Renaissance and a hatful of historical figures, Josephine follows one woman’s incredible journey from the oppressive slums of St Louis to the bright lights of Paris and beyond.

Performer, campaigner, spy and mother to the multicultural ‘Rainbow Tribe’, Josephine Baker broke the mould during her lifetime to become a 20th century icon. But almost 50 years after her death, Café Josephine, a down-at-heel New York eatery dedicated to her memory, faces closure. Nobody remembers Josephine, who she was or what she did. Co-owners Jack and Marie and former Rainbow Tribe members are determined to turn the business around but have wildly different opinions on how to do it. That is until a knock at the door, an unexpected visitor and a tumble back through their family history that some would prefer forgotten…

The stage set for Josephine is simple, yet brilliant. with just three very talented cast members telling the tale. As the performance started, I was drawn to a lady telling the story through sign, just a great way for the production to allow everyone of all background and abilities to feel included. I hope this happens in more performances as I feel this to be invaluable for everyone to enjoy theatre. Well done!

When it comes to the story itself, wow, what an incredibly moving story of a black women aiming to change the world’s perception on racial differences. The story was inspiring, moving and provided plenty of opportunity for discussions on how people of colour have been judged or treated solely on their colour of their skin. It left me wondering how I had not heard of this iconic woman before!

With only three cast members, I was transfixed by their ability to transform into multiple characters without any costume changes, seamlessly transitioning into a completely different character. These changes were flawless, yet super impressive. There is also a wonderfully immersive element, with the audience encouraged to join in with one of the dances, creating a wonderful atmosphere in the process.

Overall this was a very powerful performance and I highly recommend anyone to go check it out.