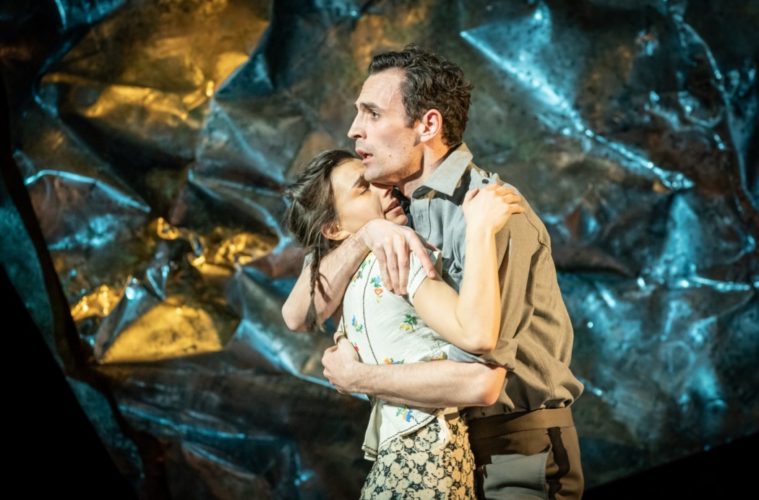 If Captain Corelli’s Mandolin makes you think of Nicholas Cage as the romantic lead in a Hollywood adaptation, then think again. Rona Munro’s retelling of this classic Louis De Bernieres tale of love and conflict on the Greek island of Cephalonia is a powerful, creative and emotional production which challenges the audience, combining elements of classic theatre, creative imagery and dance.

The story takes place among the idyllic setting of the Greek island of Cephalonia where village life is ravaged by the occupying Italian forces during World War II. The stark stage set comprises just a step ladder, two planks, a herb garden and a bashed metal backdrop hanging provocatively behind the action. As the action progresses, so this backdrop displays a map of the island, consuming fires, advancing tanks, invading paratroopers and even the face of a dying man, and yet around it life continues as relationships are made and communities prevail.

From the start we’re introduced to the central figures of Dr Iannis, his daughter Pelagia, her young lover Mandras and Carlo, and Italian soldier thrust into a conflict that ultimately forces him to pay a high price for his idealism. 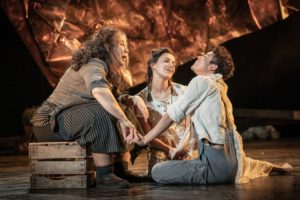 Throughout the story telling is creative, beautifully portrayed and at times incredibly powerful. At a time of intense change, the idealistic Dr Iannis, portrayed by Joseph Long, looks for inspiration from history while loving and encouraging his independent daughter’s desire for more than the traditional life of a Greek housewife. Long is joy to watch, full of charm, whether he’s writing poetry, helping his neighbours or even when peeing on the herb garden.

His daughter Pelagia, meanwhile, yearns for love and life, with an intelligence and drive that is beyond her small island home, but conflicting with a sense of duty.

When the war finally reaches the island home, lives are torn apart and it’s the conflict and changes that dominates the proceedings. While love is lost and found, it remains a constant theme throughout the production, love of friends and family, of home, of the old ways and the desire to travel, of change and a need to learn more. 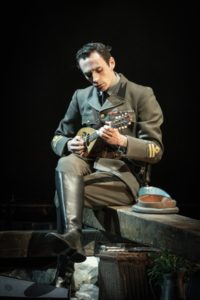 With the arrival of Captain Corelli, Pelagia finally finds the catalyst for her new emotions and desires. However, as an officer from the hated occupying army, it’s a relationship that is bound to be challenged by culture, family and the changing fronts of the conflicts around them.

Throughout the production is clever and creative. That stark stage portrays battles, firing squads, beautiful beaches and a family garden, complete with a pet goat wonderfully portrayed by Luisa Guerreiro. The talented troupe move with the grace of dancers, speak, swear and sing in the languages of their characters, and throughout have an energy that draws the audience in.

Yes, I admit that I had neither watched the film or read the book before seeing this production, but I still found it enthralling. No, I didn’t rush home afterwards to watch the film, but I will borrow my wife’s copy of the book and learn more about this touching tale.

Captain Corelli’s Mandolin plays at the Theatre Royal Bath until Saturday 18 May. For more information and tickets, click here.