Over a hundred children from across Bath have joined forces at Monkton school this week to create a one off orchestra in less than five hours.

The challenge was set by Monkton’s Music department to eight local schools who came together in the morning to find out what musical pieces they’ll be performing. The children were all in years three to six and play instruments at pre Grade one through to Grade four. They were joined by a number of Monkton Prep school pupils too, creating one multi-school orchestra.

The Orchestra Day was put together by Monkton Prep School’s Director of Music Helen Harris, who said, “This was such an exciting event to be hosting here at Monkton and we were delighted to welcome so many pupils from local schools to join us for this incredible challenge.”

Helen added, “Not only are we creating an orchestra in just five hours, for many children this is their first performance in a group this size. It’s amazing to see how they come together and create such great music.”

The whole day culminates in an exclusive one-off performance at Monkton school to the children’s parents by the newly created orchestra.

Helen explained, “Often learning an instrument can be very much an independent activity. The idea of this day is to give children the opportunity to experience the fun of playing in a large group, to inspire them to continue practicing and work towards joining other groups and children’s orchestras when they get a bit older.” 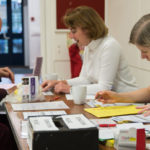