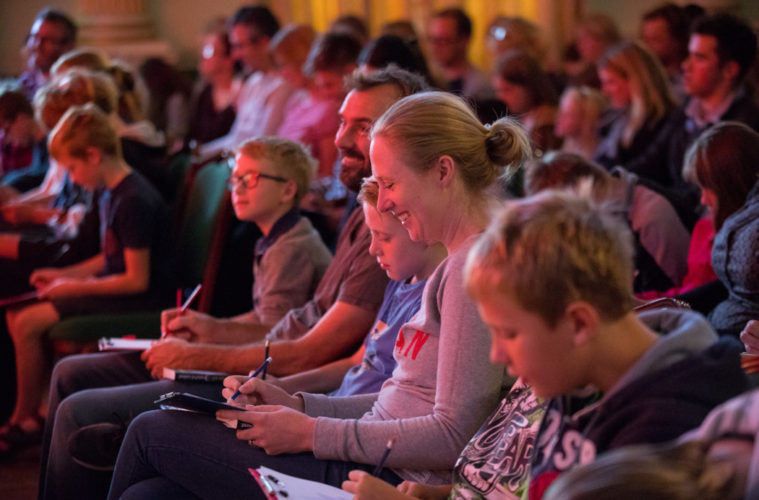 The Bath Children’s Literature Festival is coming back to the city from Friday 27 September to Sunday 6 October. Here are ten great ways for your children to make the most of the event.

Some children will be spending their summer with their noses stuck in a book, happy to feed their imagination with the written word. Others may have to be tempted to take up reading, lured by their fascination for a subject. Bath Children’s Literature Festival organisers understand that readers have different tastes and interests.

1 Silly stuff If yours is the child with a strong sense of the ridiculous, go and laugh your socks off as comedian Harry Hill fills the Forum (Saturday 28 September) with the latest news from Matt Millz, Britain’s youngest stand-up comedian. Get more giggles at The Great Dog Bottom Swap (Sunday 29 September) or Tom McLaughlin’s Funny Show (Saturday 28 September).

2 Spirit of adventure These are the children who love excitement and exploration. Be inspired by tales from Wild Girl Helen Skelton (Sunday 6 October) of real-life adventure, kayaking along the Amazon or cycling at the South Pole. Or perhaps you’d prefer an armchair adventure, exploring myths and monsters with authors Catherine Doyle (The Storm Keeper’s Island) and Sinead O’Hart (The Eye of the North) (Sunday 29 September).

3 Creative people The young artist is never happier than with a pen in hand. They will love the mass doodling session led by Liz Pichon, the creator of the Tom Gates series (Saturday 5 October) or hearing illustrator Laura Ellen Anderson talk about how she drew Amelia Fang, her little vampire (Saturday 5 October).

4 Guardians of the planet The children who want to protect our earth and its irreplaceable wildlife will be galvanised into action by McFly’s Dougie Poynter offering inspirational and practical advice on ditching the plastic in our everyday lives (Friday 27 September), or dive into the deep blue ocean with TV presenter Miranda Krestovnikoff as she talks about her book The Sea and the creatures who live there (Saturday 28 September).

5 Fantasy and imagination Magic and mystery transport children to other worlds and who better to inspire them to create their own stories than Cressida Cowell, creator of How to Train Your Dragon and author of The Wizards of Once series (Saturday 28 September). Or join the creator of Goth Girl and Ottoline, Chris Riddell as he brings tales from the Kingdom of Thrynne along with his fantastic illustrations.

6 Familiar friends Parents and children enjoying meeting old friends and seeing characters they know and love. And there are plenty at this year’s festival. Percy the Park Keeper and his animal friends are celebrating their 30th anniversary this year and author Nick Butterworth is coming to meet Bath fans and bringing them a new Percy book, One Springy Day (Saturday 28 September). The Wimpy Kid has loads of fans in Bath and The Wimpy Kid Show promises fun activities for old friends and new (Saturday 28 September).

7 Tiny tots The under fives love stories, captivating characters and vivid images. Take them along to meet Hugless Douglas, a lovable bear who is need of a hug (Saturday 28 September) or celebrate 20 years of That’s Not My …. the Usborne series that has delighted children for two decades. This informal event with fun and songs at the central library is suitable for children aged three and over (Saturday 5 October).

9 Teenage readers There are several events for young people on the cusp of adulthood. Former Children’s Laureate Malorie Blackman, author of the modern classic Noughts and Crosses, has a new book in the series, Cross Fire tackles issues of race, class and politics (Saturday 5 October). Telegraph columnist Bryony Gordon is a champion of mental wellbeing and has written her first book for teens, You Got This, full of sound advice for being yourself (Saturday 5 October).

10 For mums and dads While there are lots of events that parents will love just as much as their children a few will hold particular appeal for adults. Jackie Morris, the illustrator of a beautiful British nature book The Lost Words, with writer Robert Macfarlane, will be talking about her work and how this remarkable book came about (Sunday 29 September). Parents will also appreciate the story time at the Guildhall, which is being held as a tribute to Judith Kerr, the writer who died recently after a lifetime of creating so many much-loved books, including The Tiger Who Came to Tea and The Curse of the School Rabbit (Sunday 29 September).

Girls Who Code at Bradford on Avon library