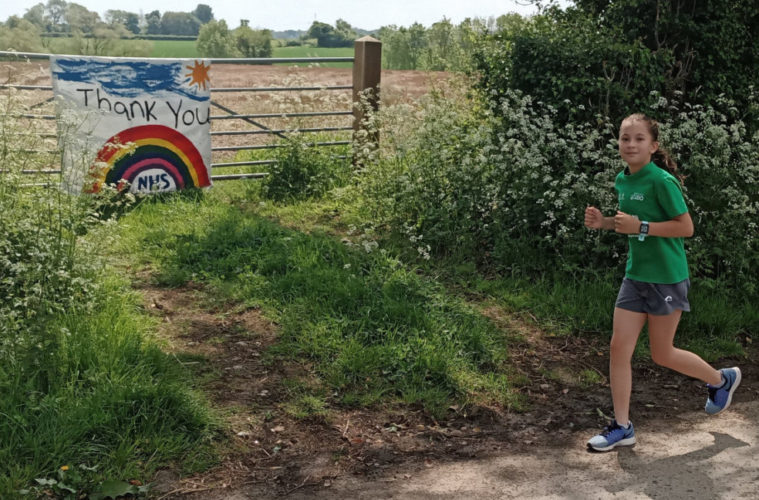 Young runners aim to complete 1,000 mile challenge to raise funds for the NHS

Junior members of the Corsham One Mile Club are aiming to run a total of 1,000 miles to raise money for NHS Charities Together. The runners, aged six to 11 years, are covering the combined 1,000 mile total through a collection of individual runs that equal the distance from John o’Groats to Lands End, via stop offs at places of interest along the way.

“I had the idea of running 1,000 miles, while my son in Australia suggested it could be a virtual journey and my wife (who taught this age group) added the idea of visiting places of interest and making it a bit educational,” explained club founder, Humphry Barnikel.

“The children are running with parents and all using different parks and streets near their homes, with each mile run going towards the grand total.”

“I’m doing this because the NHS runs on hard work, goodwill, and people who are prepared to support them,” said Sophie, one of the junior runners taking part in the event.

Humphry explained that the Corsham One Mile Club is a running club for children and parents, which started back in 2008. “The club was originally meant to be for adults to get them started on running. However, it soon became apparent that a mile (or equivalent while playing running games, doing relays, treasure hunts etc) is an ideal distance for 6 to 11 year olds to have fun while keeping fit. All the children have to come with a parent or guardian and it is not unusual to have 60 to 70 taking part.

“The children get certificates, T-shirts, medals and trophies when they have clocked up certain numbers of miles. The spin off has been that some parents have discovered that they can run too!”

For more details on the running club, click here