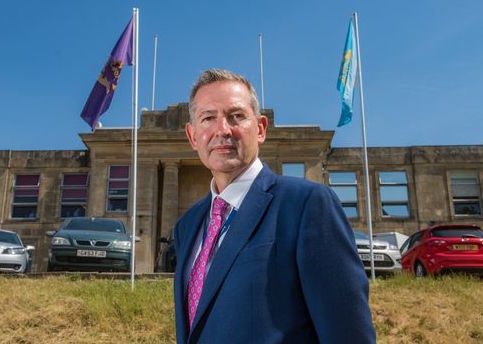 Beechen Cliff headmaster to leave after 16 years leading the school

The Headmaster of Beechen Cliff in Bath is to leave the school at the end of the summer term, after 16 years in his post. Andrew Davies recently informed the families of the school’s pupils of his decision in letter, commenting, ‘Whilst it has been a difficult decision to leave a school which is so very special to me, I believe it is the right time to step away.

‘I have always felt very privileged to be the Head of Beechen Cliff, a school which I admired from afar, long before the opportunity arose to take on the headship. The deeply held affection I have for the school is shared by so many across the school community and there is little doubt that the ‘spirit’ of Beechen Cliff has been a draw which has been felt by many who work within it. I have seen my own children through the school and I have been fortunate enough to see first hand how the endeavours of the staff of the school have inspired them academically and in taking up broader interests which continue on into adult life.

‘The enduring support of parents, pupils and the governing body has ensured that Beechen Cliff has been able to thrive, even when faced with challenges which might have brought other institutions to their knees; the resilience, determination and ultimate belief of the wider community in the school and its aspirations has allowed it to continue to excel, both academically and in terms of its provision of an exciting and enriching extra-curricular life.’Thank you all, current and past parents and pupils, for the support you have given both myself and the school over so many years.’

Speaking to The Bath & Wiltshire Parent, Andrew added, “I’m obviously very sad to be leaving Beechen Cliff but after 16 years, it is the right time to look for new challenges.  I have been overwhelmed by the messages from staff, parents and pupils (current and former), all of which have it clear that the enthusiasm they have for Beechen Cliff matches my own, as well as recognising that the successful academic provision was only one part of the incredibly rounded and enriching experience which we believe lies at the heart of a ‘good’ education.

“The school will certainly look to build on its strengths, most notably a parent, staff and pupil body which believes strongly in its vision for what education should be and how this can be achieved. I wish the next Head of Beechen Cliff every success in the role and can only hope that they find it as fulfilling as I have found it.”