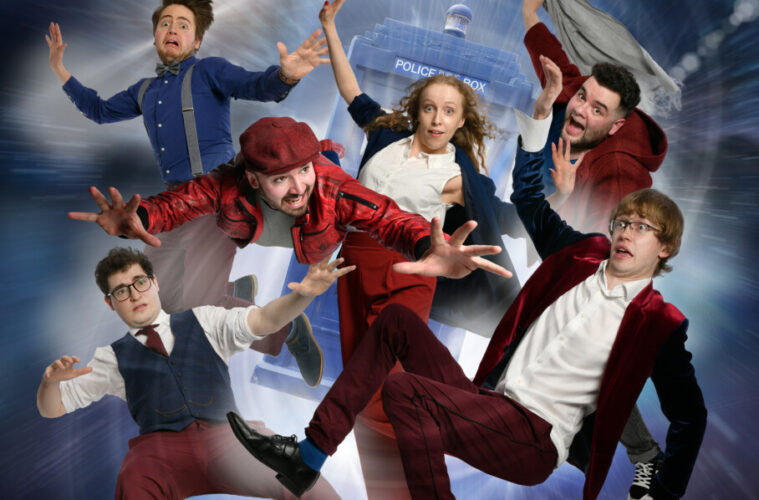 Review – Any Suggestions, Doctor? An Improvised Doctor Who Parody at Komedia

Time lords aplenty, a trip to Middle Earth and the wrong trousers all take their part in this improvised Doctor Who show

Of course we had tickets for Any Suggestions, Doctor? An Improvised Doctor Who Parody at the Komedia in Bath last night. My ten year old son is Doctor Who mad and while his Matt Baker Doctor Who outfit might not fit anymore (he’s going through one of those growing an inch a day phases!), the sonic screwdrivers and Tom Baker flowing scarf were still usable, so along we went

Komedia might be best known for comedy and music events aimed more at mums and dads, but it also runs a few very choice events for younger audiences too, while even some of the main events are promoted as suitable for ages 14+.

For the Doctor Who show, an almost full venue was treated to a high-energy, extremely clever, very funny show delivered by a team of young, sharp and talented performers who clearly knew their time lords inside and out, and were well up for challenge.

The show started with six performers on stage and huge blue dice being rolled to choose who would be out Doctor for the evening. Then came the start of the audience participation – “Give us a setting for our show,” we were asked. With suggestions including Slough, a quarry and Middle Earth, an audience vote chose the last one, along with a title for the episode of The Wrong Tourers. And so they were off, presenting an off-the-hoof story taking in hobbits, wizards, The Master, H&M and moon cheese, plus a surprise visit from JRRRRRR Tolkein.

No, don’t worry, I’m not giving anything away as the whole idea here is that the plot changes for every performance.

The result was very silly, very funny, yes – a good bit geeky too and all very entertaining. While some of the references went a little bit above my ten year old’s head, there was still enough mainstream Whovian trivia to keep him smiling, even if perhaps the whole show went on just a little too long for him to keep his full interest.

Still, the general audience reaction was very positive, with plenty of participation when requested, loads of hearty laughs and supportive applause at the end.

For more details about upcoming events at Komedia, click here