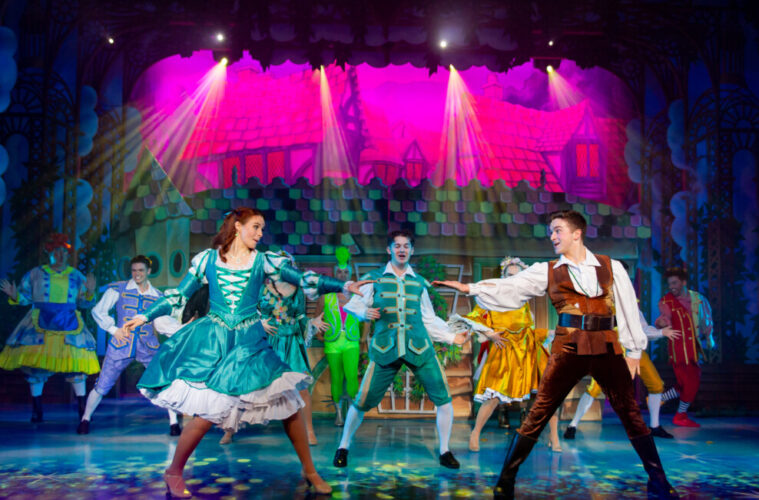 Review – Jack and the Beanstalk at the Swindon Wyvern Theatre

Steph Cadey and her son Austin enjoy a night of panto fun in Swindon – oh yes they do!

It’s panto time! And for Austin and me, this meant a night out at the Swindon Wyvern Theatre to see Jack and the Beanstalk, complete with dance and television star Louie Spence!

It was so good to be back at the Wyvern for some good old traditional family festive fun, and with bubbles floating through the air like snow drops, it certainly began to feel a lot like Christmas! It was so lovely to be back chanting and cheering once more… oh yes it was!

This was a return visit for us to this lovely theatre, which offers a really family-friendly welcome. And in no time, the lights went down, the curtain went up and the fun and games began. Of course it was silly – all the best pantos are. There was Jack (Zack Guest), with the help of the Spirit of the Beans (twirling diva extraordinaire Louis Spence) endeavouring to save Princess Jill (Rebecca Jardine) from the clutches of the giant, Blunderbore.

And then there’s Fleshcreep (played by Danny Lane), who really is an exceptional villain, and soon has the audience in his evil grasp. OK, yes, I do secretly admit to loving a bad guy and it was a joy to join in with the boos and hisses. After tricking Jack into selling Daisy, the tap dancing cow, for beans instead of gold coins, he takes Jill to be the giant’s bride. Cue more boos and hisses…

When it comes to Silly Billy (Samuel Parker), he had Austin and me laughing out loud. His on stage repartee with Dame Trott (played by Matt Rixon) was truly hilarious, with a wonderfully witty script – including plenty of local references – bringing the performance to life.

The highlight for Austin had to be the giant Blunderbore – how cool to have a real giant on stage!  Throughout, however, the set was incredible, including Jack clambering the huge beanstalk to reach the ogre in the sky.

All-in-all this was a production that delivered everything that we have come to know and love about panto, and the result was fun, laughter, singing and even dancing in our seats. This is certainly a family show not to miss!

Jack and the Beanstalk run at the Swindon Wyvern Theatre until 2 January 2022. Find out more and book tickets here.