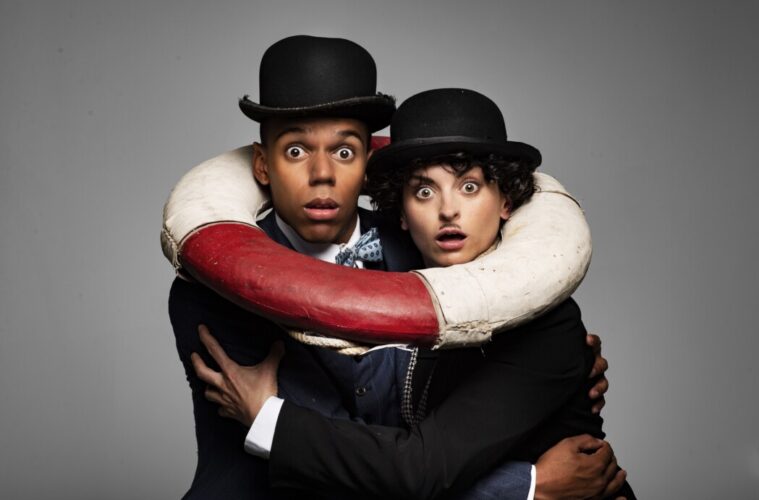 Review – Charlie and Stan at the Theatre Royal Bath

Did you know that Stan Laurel is Clint Eastwood’s dad? No! That’s because while this piece of gossip did circulate around Hollywood and beyond a few years ago, it is in fact total tittle tattle – although it remains a great conversation starter at parties!

What is true is that Stan – better known, of course, as half of Laurel and Hardy, the wonderful comedy double act of early American cinema – and the legendary Charlie Chaplain did in fact, back in 1910, share a cabin on a tramp steam from Liverpool to New York as part of Fred Karno’s famous music hall troupe. Along the way they practiced their comedy routines together and while, eventually, they drifted apart, they both went on to become comedy heroes famous around the world.

Charlie and Stan tells the story of this voyage, and cleverly reverts to the silent movie style which the two so successfully embraced, throughout the production. This includes (almost) no dialogue, captions appearing to explain the actions and – best of all – an original piano score played live on stage.

The result is clever, innovative, creative, full of fun and hugely enjoyable! Throughout the performances are superb, particularly Danielle Bird as Charlie Chaplain who portrays the wonderful physicality of the little clown with wonderful panache and a great deal of skill. The trademark bowler hat is there from the start, and as the story unfolds, so we can catch glimpses of some of his most famous routines developing.

Jerone Marsh-Reid, meanwhile, as Stan Laurel, perfectly captures the charm and apparent naivety of the star to be, and the physical interactions with Charlie are wonderful to watch.

Nick Haverson as Fred Karno and Sara Alexander playing all the other parts, including Chaplin’s mother, and the piano, however, almost threaten to steal the show! While Haverson takes on any number of exaggerated comedic traits, alongside a wonderful portrayal of a drunk and highly impressive drum solos, Alexander is both a wonderful musician and a talented comic, right from the application of anti-viral gel each time she returns to the piano to even enticing an unsuspecting audience member to help out with one of the skits…

The result is an absolute joy – 80 minutes with no interval that really does fly by, with an audience of all ages clearly appreciating the skill and comedy on show. To be highly recommended…