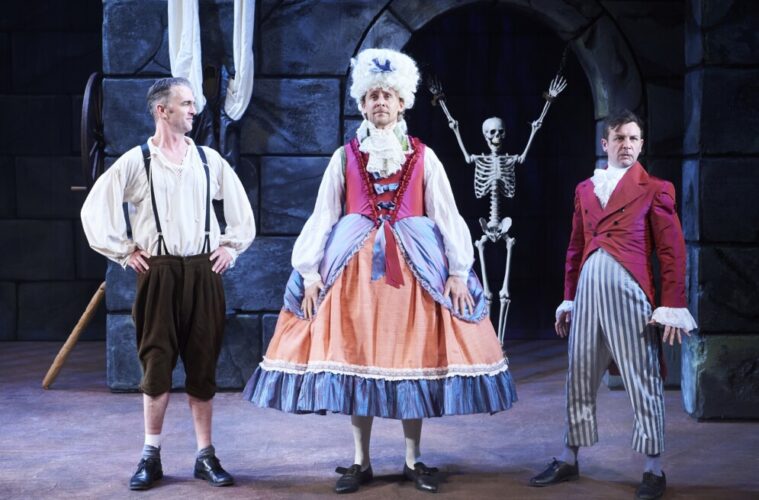 Review – The Play What I Wrote at the Theatre Royal Bath

I love Morecambe and Wise, for me that greatest ever of British comedy double acts and a firm favourite of TV audiences in the 1960s, 70s and 80s. So any chance to revisit their work was always going to be anticipated, particularly when it’s a multi-award winning production with sold out performances in the West End.

The result was a visit to The Play What I Wrote, a wonderfully all-action slapstick homage to messers Eric and Ernie, with enough famous gags and references to keep the die-hard fans happy, alongside lashings of silly entertainment to make sure you keep laughing even if you’re new to their work.

The plot revolves around a comedy duo, Dennis (Dennis Herdman) and Thom (Thom Tuck), with Thom wanting to produce his French Revolution dramatic piece, A Tight Squeeze for the Scarlet Pimple, while Dennis would prefer to stage a Morecombe and Wise tribute act. The result is an excuse to revisit any number of Morecambe and Wise classics, with even the famous golden curtain making an appearance.

Throughout, Thom is desparate to find a star name to headline his play, with Sir Ian McKellen pencilled in, although unfortunately distracted by cocktails in the bar next door. What follows is a nightly anticipation about who the star will be, with such accomplished performers as Ewan McGregor, Bob Geldof, Charles Dance and Sue Johnston all having taken part in the West End productions.

While Sir Ian was unfortunately unable to make an appearance, he was very unably covered for by a certain Tom Hiddleston, yes, him of Loki, Marvel and The Night Manager fame. Cue cheers and whoops from a very excited audience and later annoyance from my 11 year old Marvel-loving son who had to sit out this visit to the theatre…

Are the performances as good as the great men? No, of course not, and it’s very clever of this production not to present itself as a straight tribute act (check out the excellent Eric and Ern for this). With Herdman taking the comic role and Tuck the very able straight man, what they do manage to do is remind us of the genius of the originals, albeit in a hyped, 2020’s style.

A special mention has to go to Mitesh Soni in the role of Arthur, a friend of Dennis’s from the pub brought in to help con Thom into a tribute act, and playing a variety of roles including produced David Pugh, a dog and Scarlett Johansson, all just to get his wish of playing a harmonica solo.

With outlandish choreography throughout (I always loved Eric and Ernie’s song and dance sequences), dashings of energy and a copious helping of nostalgia, The Play What I Wrote is wonderful, old-school comedy that has the audience laughing along with every new gag.

The Play What I Wrote plays at the Theatre Royal Bath until 22 January 2022. For more information and tickets, click here…