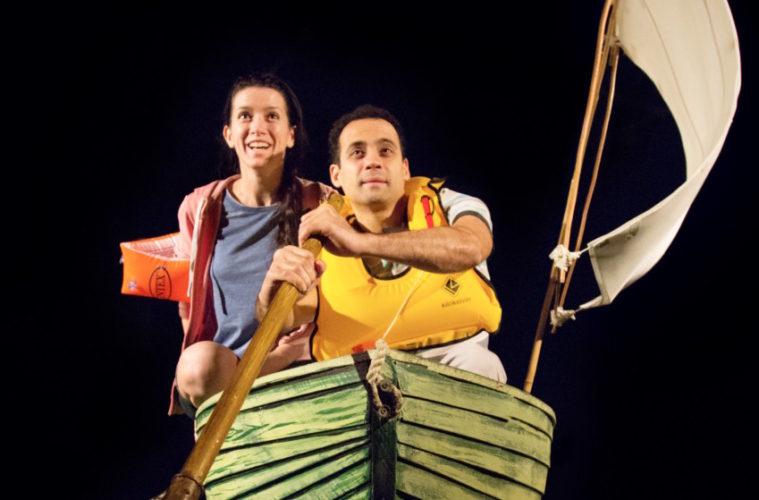 Children’s theatre coming to the egg in Bath over March

March at the egg theatre in Bath begins with an exciting, international adventure in Adrift (pictured above), bringing together mime artists from Brazil and Spain, and original music from members of The Mighty Boosh for a nautical journey.

Two children are in a boat. They play, they laugh, they argue! They dream of catching a fish so big it will capsize the boat, or of encountering a mermaid to sing for them, or a whale that they can lasso to pull them to shore. They dream of a new land of thick green grass and endless blue skies, a safe land…

Told with tenderness, humour and Action Transport Theatre’s signature visual storytelling, Adrift plays on 7 March and is a celebration of the resilience and imagination of childhood. (ages 7+)

Egg favourites Lyngo Theatre return with What A Wonderful World over 14 & 15 March. CBeebies star Patrick Lynch takes the audience on a dream voyage full of visual and tactile delights. Starting by putting the stars in the sky and moving through history, discovering fire, What A Wonderful World is  an amazing romp through the universe, creating a new world, one fuelled just by your imaginations! But what will go in tomorrow’s world? Snowballs and flamingos, of course! (ages 2+)

Italian company TPO, renowned for their interactive, digital performances, return to the egg on 21 & 22 March. Engaging pre-school and Early Years audiences with their unique storytelling, Mini shows two characters and a space which becomes a magical place of discovery. Children can join in the play – experiment, explore the space, shapes, sounds and colours and compose a great design. (ages 2+)

For older children and students, Box Clever return from 27 March to 2 April with its adaptations of three classic texts – an entertaining and fun ways to revise for GCSEs! Characters from Shakespeare’s Romeo and Juliet and Macbeth, and Dickens’ A Christmas Carol are brought to life with vibrancy and colour, blending the original text with modern language to keep faith with the writers’ intentions whilst making a link with the 21st century.

Box Clever has gained a strong reputation from English and Drama teachers across the country for their accessible and immersive adaptations. (key stage 2 – 4)